In this material we will tell you about the history of the emergence and about the present of Yahoo! brand fom USA.

Yahoo! is a world famous IT company from the USA, which owned the second most popular search engine in the world. The brand also provided search engine users with a large number of additional services that were collected in Yahoo! Directory. The most famous is Yahoo! Mail, in addition, it is also the oldest service today.

In 1994, two friends Jerry Yang and David Filo created a site that was a structured directory. It contained links to the sites they liked. There were no far-reaching plans, this site was created for them only. But over time, it began to gane great popularity.

In 1995, friends assessed the commercial potential and dropped out of school, starting to work closely with their offspring. At the same time, the yahoo.com domain was registered. The number of links to sites has reached 10 thousand, visitors - 100 thousand people a day. $2 million was raised for the development of the project.

In 1996, MyYahoo was launched and a personalized start page that featured news, weather information, stock reports, and other useful information for users.

Since then, Yahoo has been no longer just a search engine, it has become a full-fledged portal with a start page for several million users. Due to the rapid development of the company, its shares appeared on the stock exchange.

In 1998, the company acquired the mail service Rocketmail, on the basis of which its own mail Yahoo Mail was created.

In 1999, the company's market value reached $100 billion. At that time, it became the most valuable IT corporation in the world.

Despite the fact that the search engine became the most popular, the company did not develop its own search algorithms, but used technologies from other developers.

In 2000, the management of the corporation decided to temporarily suspend the development of its search engine and license search from Google for 4 years. It was a colossal miscalculation - users began to use Google more often, and bypassing Yahoo. The company began to lose its popularity. In the same year, Yahoo missed the opportunity to acquire eBay.

In 2001, the company faced another financial shock. Due to the collapse of the dot-coms, the value of the company's shares fell significantly. The price of one share was only $8, while a year ago it was worth $112. 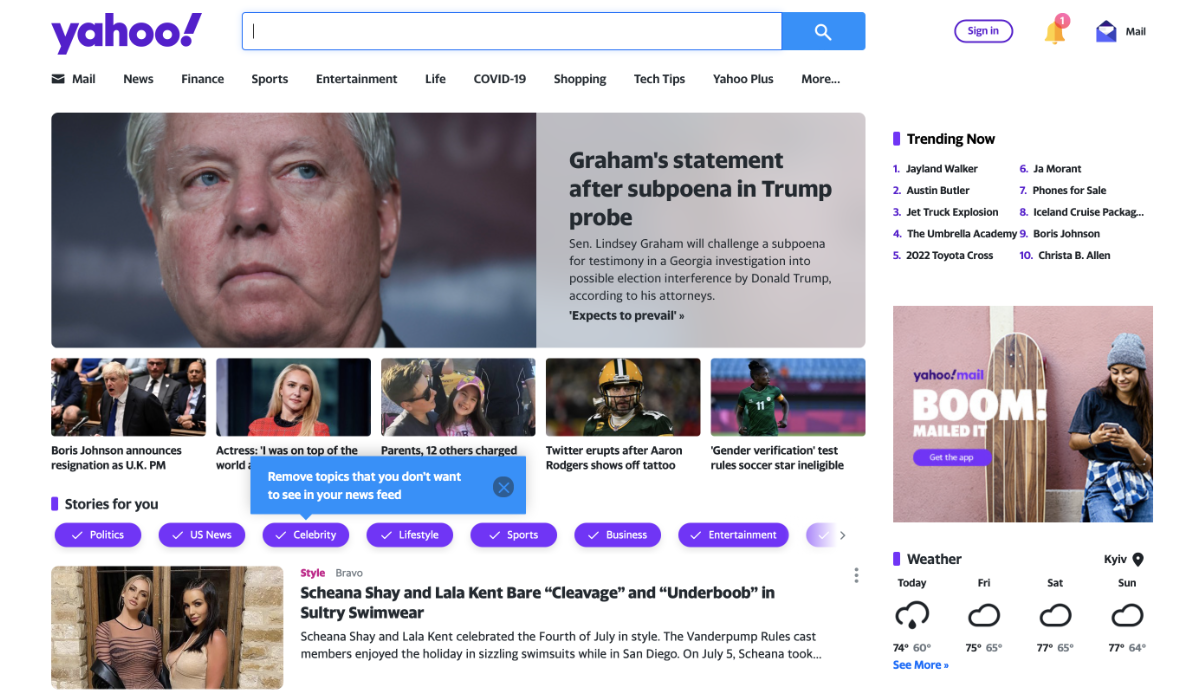 In 2003, the company launched a large number of different services: maps, telephone directories, chat rooms and many others. The start pages were filled with content to the maximum. The company's management is making every effort to develop contextual advertising, and at this time marketers convince business owners of the effectiveness of this direction.

In 2004, the contextual advertising system was successfully implemented. In fact, Yahoo was the ancestor of this type of advertising, when queries in the search engine and ad views were linked. The company also launched full-fledged independent sites: news, entertainment, sports.

In the period from 2005 to 2016, the corporation launches a number of other services, such as Yahoo Music, Yahoo 360 and many others. Continues to work on the development of "smart advertising", thereby increasingly competing with Google.

The biggest failures of Yahoo

Despite a number of successful decisions and breakthroughs in performance, in 2016 the company faced another crisis. Blogging platform Tumblr depreciated from $1 billion to $ 230 million. Facebook and Instagram appeared in this niche, rapidly gaining a leading position.

Actual losses amounted to 4.4 billion, and profit - to only $ 4.9 billion. To save the situation, the company's management decided to sell most of its projects (more than 50%), but this did not save the situation. Further, the company's main assets were sold: an email service, a search engine, and a depreciated Tumblr. It was not possible to revive the company and in the middle of 2016 it was swallowed up by the mobile operator Verizon for a symbolic, compared to previous proposals, amount of $4.8 billion.

According to experts, Yahoo's main problem is that the company was never able to choose a specific development path, but worked on several fronts at once: technology, media, a search engine, various services, and as a result, it could not gain a foothold anywhere, losing in all directions to its own, even at that time, weaker competitors.