The history of Booking from the very beginning to the present day. Learn how the Booking brand was created and developed and what it is known for today.

Booking is an online hotel booking service that has changed not only the history of travel, but also its essence. The Booking company and its service of the same name is by far the most popular hotel reservation system in the world.

More than 1 million rooms are booked per day thanks to the Booking service. At one time, the company managed to bypass the similar online booking service Expedia created by Bill Gates and become a leader in this niche.

Even before the Booking.com service appeared, a similar resource had already been created by Bill Gates. In 1996, Microsoft launched Expedia.com. It was also possible to book hotel rooms on the site, but this Internet resource had one significant drawback – there were no descriptions and photos of the rooms. In fact, a person booked a room blindly, knowing only the basic parameters – the floor and the number of beds. But even despite this shortcoming, the service successfully existed for some time, even with the emergence of Booking.com.

Booking.com was created in 1996 by Gert-Jan Bruinsma. Being a college graduate, the guy decided to go from the Netherlands to Budapest and realized that booking a hotel room “blindly” is very inconvenient. In addition, he thought about starting his own business.

Gert-Jan did not have much tourism experience, but he understood that the Internet and tourism would be inextricably linked in the near future. This is how Bookings.nl was launched. As Gert-Jan later admitted, he was "inspired" by Hilton.com and even borrowed some elements from them.

There was no money for the project, the guy collected it from friends who, to the best of their ability, tried to support him. In order to fill his site with information, Gert-Jan contacted the hotel management or their representatives in various ways, asking them to send photos and descriptions of the rooms. The resulting printed photos (at that time digital technologies were not available to a wide range of users), he scanned and added to the site along with a description of the rooms.

The project progressed rather slowly. In 1997, there were only 10 hotels in the catalog, but visitors could already see photos of rooms, read information about them and book a room. The main reason for the slow development is that in 1997 the Internet in Europe was not yet as accessible as in America. Access to it was mainly from universities and some large IT companies. Therefore, Gert-Jan sent questionnaires and received answers from hotels by regular mail. Some took a long time, and some were completely lost.

The resource at that time could not seriously compete with the already existing Expedia from Microsoft and Travelocity from American Airlines, even despite the fact that Booking.com looked much better visually. In addition, the two American competitors became crowded in the same market and turned their attention to the European market. 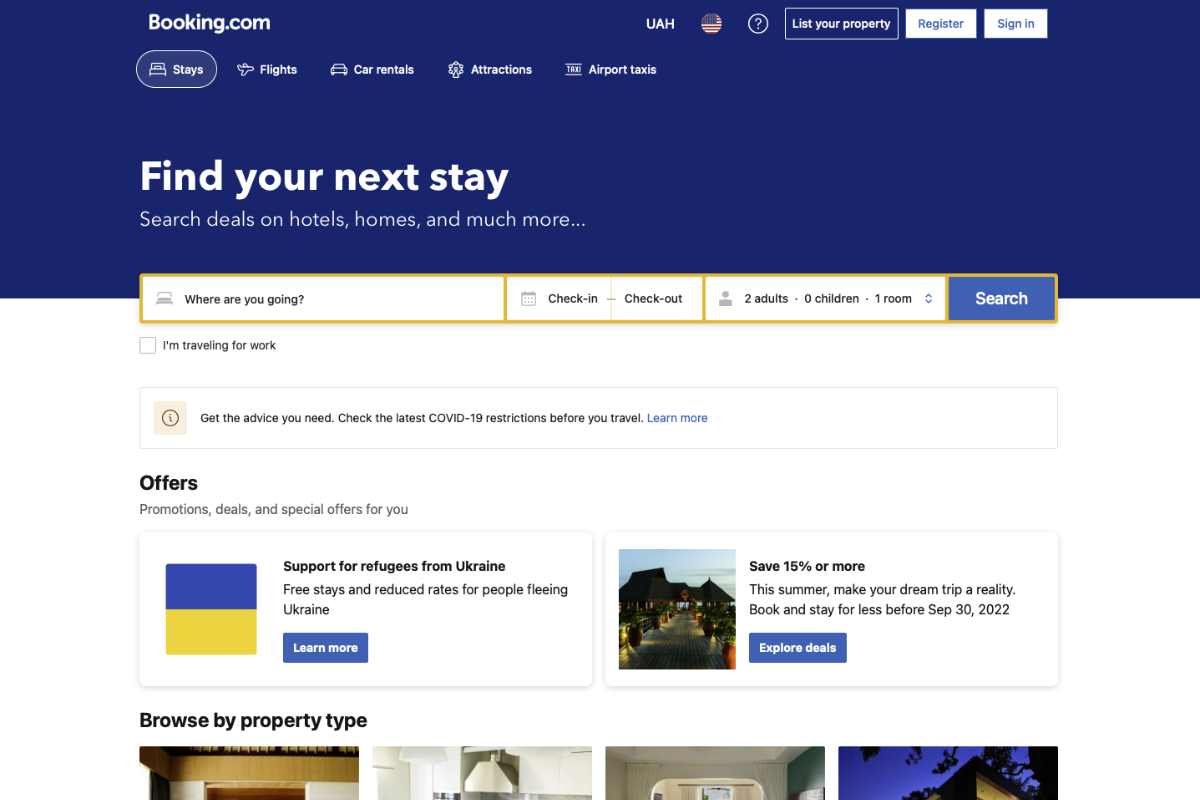 So in 1998, Bill Gates' Expedia managed to attract 15 thousand customers in the first three months, and a year later the booking volume on the site totaled $16 million.

Despite the successful promotion of competitors in the European market, the Bookings management did not give up, but, on the contrary, decided to work not in a stereotyped way – most of the services were put on cooperation with chain hotels. The Booking brand focused on independent hotels, allowing even small hotels, of which there were many in Europe, to declare their existence. And the strategy worked.

A significant advantage of Booking.com over its competitors was its pricing policy. On average, such services asked for a commission of 35% of the cost of the booking, while Booking took only 10-12%. The service did not ask for an advance payment – you could pay for the room upon arrival.

This approach brought the service wide popularity not only in the European, but also in the American market. Booking.com was able to displace competitors first from all over the European market, and then took a leading position in the American. So, as of 2005, there were already more than 7 thousand hotels in the catalog, and the turnover amounted to $25 million.

In the same year, Booking.com received a lucrative offer from the American company Priceline Group, as a result, the company was sold for $133 million.

Today, the service is part of the American company Priceline Group, which is successfully developing and enjoying great popularity all over the world.

Do you want to achieve your goals in business, career, and life faster and better? Do it with SaveMyLeads – a tool that will save you from the routine work, and free up additional time for fulfillment your goals. Test the capabilities of SaveMyLeads for free and enjoy the effectiveness of this tool.